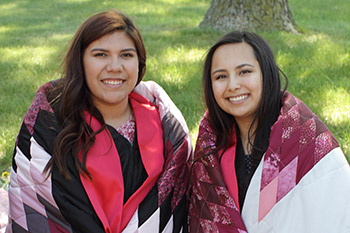 Star quilts are given to mark important life events, like graduation.

The pattern is made of small diamonds pieced together in eight sections. These sections join together to create the eight-point star.

The pattern of the star quilt is inspired by the Morning Star. The Morning Star is the last and brightest star in the eastern horizon before dawn. It was believed the Morning Star represented the way the spirits came to earth and served as a link between the living and those who have passed.

Historically, star patterns were created with plant dyes and adorned buffalo hides and tipis. When missionaries arrived in the mid-to-late 1800's, they introduced textiles and sewing to Native American women and the star quilt was born.

The star quilt’s tradition of honor grew as the quilts were draped around the shoulders of Lakota warriors and hunters when they returned from battle, a successful hunt, or at the start of Haŋblečeya — Vision Quests. It was also presented at funerals to honor loved ones on their final journey.

Today, star quilts are one of the most valued gifts of the Lakota (Sioux) people and are still draped over the shoulders of the recipient to symbolize protection on their journey through life.

Star quilts may be used:

Generosity is an important virtue among the beliefs and traditions of the Lakota (Sioux) people. The image of a star quilt serves as a reminder of the significance and honor that comes from giving to others.

Learn more about star quilts in this video from South Dakota Public Broadcasting!