The thípi — tipi — was looked upon by nomadic hunters as “a good mother” who sheltered and protected her children in a secure and comfortable place.

Long before the Sioux, Cheyenne and other Plains tribes came to the grasslands, the tipi had been developed by the Indians of the northern forests. They used a pole frame to create the conical shape and then covered the frame with birch bark, caribou hides or other natural materials. 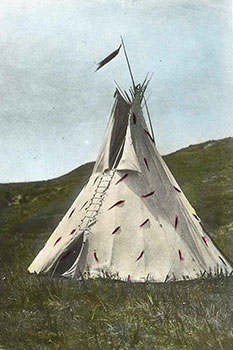 The Plains Indians adapted this basic structure to their own environment and pattern of living. An adjustment in the framework was made to accommodate the strong winds of the region. Buffalo hides sewn together with sinew became the usual covering.

For the Plains Indians, the tipi was an ideal dwelling. Like the buffalo they hunted, they were constantly on the move. This meant their homes had to be readily transportable, too. A tipi was perfect for this. Historically, the tipi was made and owned by women. They were also responsible for taking them down and setting them up when moving from place to place. To move it, two ends of the supporting poles were tied to a horse. The other ends dragged along the ground, thus forming a roughly triangular frame, known as a travois, on which the buffalo covering and the family’s other possessions were tied.

At the new campsites, several long poles were bound together near the top of each tipi. The poles were then stood up and slanted outward from this center tie to form the outline of a cone. Other poles leaned against this framework to strengthen it and a covering of buffalo hide was draped over the frame. The covering was joined near the top with wooden lodge pins. The entrance to the tipi had closable flaps at the lower part of the seam of the buffalo hide. An opening was left at the very top to allow smoke from the fire to escape.

In hot weather, the flaps were left open, allowing the cool breeze to flow through the tipi. During winter, an additional hide lining was added to the tipi covering, providing insulation. The fire that burned in the center of the floor kept the tipi warm and provided heat for cooking.

Because of the strong, prevailing winds that swept across the Plains from the west, a tipi was set up with the entrance facing east. Likewise, the entire shelter was tilted slightly toward the east to streamline the rear, lessening the wind’s pressure on it.

A typical tipi was crowded. It contained hide bedding, a rug for a baby, willow-rod backrests, a cradleboard, a suspended cooking bag, firewood and parfleches — bags made from rawhide — containing food, medicine and other household necessities.

Sacred objects, weapons, a shield and other items were hung on the tipi lining. This lining was often painted with brilliantly colored designs, recalling past events in the lives of those who inhabited the tipi. 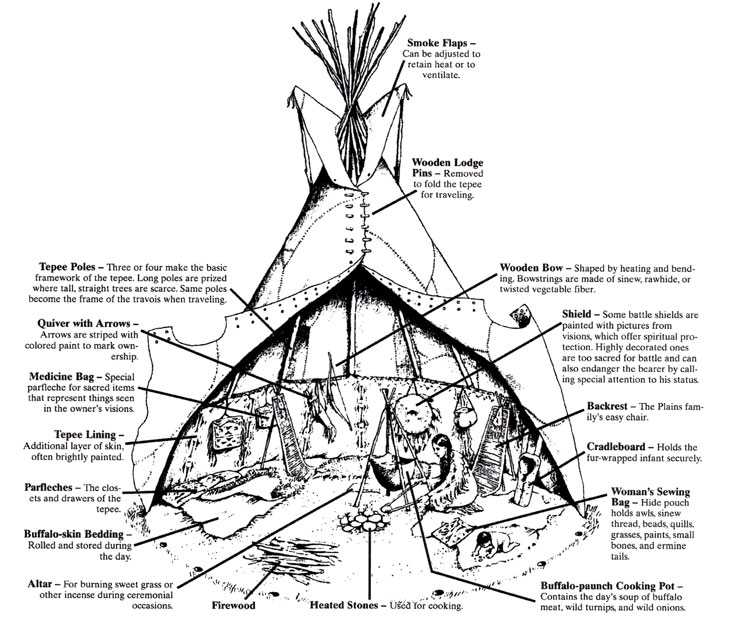